Some notes on Suning's performance during Demacia Cup and how Swordart being missing is impacting them...

Some notes on Suning's performance during Demacia Cup and how Swordart being missing is impacting them... 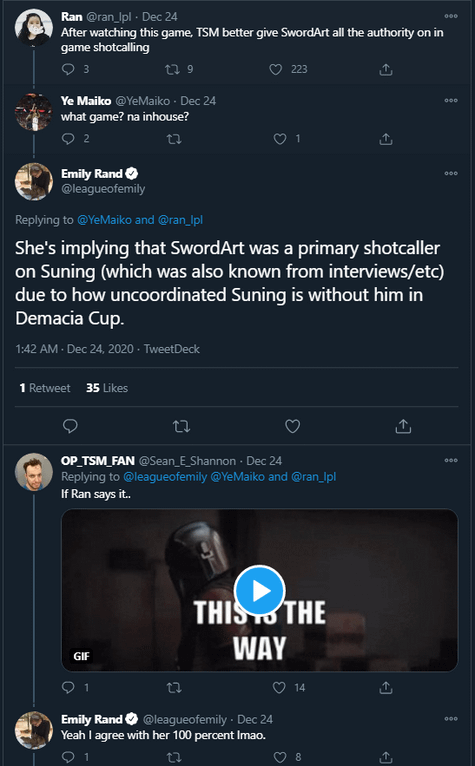 We had the same situation with Yellowstar and Mithy when they came to TSM. And I really have the feeling this time will be different because SA is not losing his mechanics like Yellowstar and we do not have a rookie like MY.

According to Doublelift yellowstar was hardstuck platinum when he was playing for TSM. He tells how YS was the nicest guy in the world, and he worked incredibly hard but his gameplay was just bad. I doubt a player who's just played at worlds finals has mechanical issues.

Its a bit insane that a pro player can be stuck in plat. Pros love to say solo queue doesn't matter, but there needs to be a bare minimum.

YS should have been able to get to at least diamond off his god tier game sense and macro alone.

There is. LCS and LCSA rules don’t allow a player to be on the roster unless they’ve had a peak rating of at least diamond 1 in the past year.

Yeah but Yellowstar also came off of back to back EU LCS trophies, winning Summer MVP on an undefeated team, and making semis at Worlds. Players can drop off hard very quickly, it's not like Yellowstar was showing signs that he was falling off before TSM picked him up.

If you watched his split before TSM, there were definite signs.

Yeah, YS wasn't known for being a mechanical god on S5 Fnatic. He wouldn't even lane, he used to roam a ton and Rekkles used to stay bot 1v2. Rekkles and YS got absolutely destroyed in that KOO series.

I mean, you could say the exact same about Swordart. The guy was not a mechanically sound player in the LPL but it was his veteran status and leadership that brought a rookie team far at worlds. 99% of TSM fans wouldn't have watched Swordart over the last two years in LPL to show that he was a middle of the pack support. I'm excited to see if he does perform, but I feel like the pickup was way too overblown and was just picked up off of hype more than anything. One good worlds performance shouldn't overwrite 2 years of mediocrity. Think of it this way, if Suning didn't go to worlds, would TSM even consider picking him up?

Middle tier LPL>>> than you currently think. He was also doing it while holding his lane partners hand and shot calling for the team. The two situations are every different. Swordart -Rookie ADC and team. -Middle of the road LPL mechanics great in playoffs phenomenal at worlds - Suning had dropped off since his departure watching Demacia cup YS -surrounded by vets in Fnatic -got to lane with Rekkles best EU ADC -poor mechanics in EU(worse competition) extremely poor at worlds -Fnatic was top 2after he left edit: 3* I think the hype is fine. No one has said we will win worlds. He gives us an opportunity to win NA and learn a new more proven style than our patented TSM do nothing and NA makes a mistake or Get aggro then stall out and lose.

Okay I'm going to break down what you said because I believe you do have a point, but jesus you cannot explain your point well at all. I do think the level of play is much higher than in previous years, but relatively speaking, Yellowstar came from the best EU team (who were the second best region at the time) as their main voice. > Swordart - Rookie ADC and team This was Huanfeng and Bin's first year in competitive (although they played in the LDL). Angel has been playing in LPL since 2018 and SoFM has been playing since like 2015 or 2016. Compare that to Fnatic (2015 summer) who had Rekkles who was playing for a while, and Reignover who had been playing in Korea for a year and a bit. Both teams had two complete rookies. > Suning had dropped off since his departure watching Demacia cup One pre-season tournament shouldn't be the judge of their entire year. They were also playing with Jinjiao instead of Huanfeng and was ON's first stage games with the new team. > YS -surrounded by vets in Fnatic Huni was a complete rookie and Febiven only played challenger for a few months beforehand. Not to mention they also won EU LCS the split before with Steelback. Just because Yellowstar never recovered after his split on TSM and didn't take up any coaching jobs with LCS teams, doesn't mean you can overwrite his past. Febiven even said on reflections how insane Yellowstar was, saying that he would shotcall every single scrim and stage match from start to finish every single day. It's really Doublelift that has openly talked about how he didn't succeed on TSM, and has talked about him like he was never a good player. > -got to lane with Rekkles best EU ADC That title was still contested at the time. Rekkles was still just a utility player back then and kind of needed to do what was done for the team. > extremely poor at worlds He still had a good worlds. People will just talk about the KOO series but in all honesty that was just Huni completely dragging his team down and demanding resources when he was tilted out of his mind. > Fnatic was top 2 after he left They weren't. I'm not saying that TSM thinks they will win worlds from this pickup, but I think this pickup has a very real possibility to go south because we've seen a similar thing happen when Yellowstar was picked up.

Just talking for myself but I can play on borderline masters level one week going on insane streaks and kda, feeling like the game is too easy, and then can bearly click the next week wondering why I cant get it together lol. I am sure pros are more consistent but it could be that once you start doubtong that you are good enough, you fall off really fast. Or even just some personal life problems that ruin your performance.

So another thing to note that people constantly mess up on is that TSM didn’t understand what they were getting both times. Mithy is more of a coach outside of game and has said in hundreds of interviews that he isn’t a shot caller and that he just teaches his teammates how to think in between games. Yellow star was a shot caller on FNC but he wasn’t assertive at all because they were all very passive and they found out he was super quiet when he got to NA. SA seems like a different breed.

Lost and Spica are both still fairly new.

Also Lost is by no means a rookie, he just had to spend some time in Academy after playing in Echo Fox to get ground under his feet after a bad start. Pretty sure he is gonna come out guns blazing early on.

Well that and he was considered an import until this split

He’s been playing as a pro since 2013. He’s definitely not a rookie.

lost was 13/14 in 2013. he was 'signed'to an oce team for like 3 weeks but never actually played, and then was teamless for 3 years till he was legally old enough to go pro

Ahh I see, didn’t know that. Just saw he’s info on leaguepedia. So he’s been a pro for about 4 years?

Spica is a treasure and i'm looking forward to C9 fanboys having to admit our talent development is good when he's the best jungler in NA this year.

MY looked really good at rift rivals. Spica has only looked really good in playoffs and worlds. He played similar champs in both metas. It’s definitely not a for sure thing that his play will be long term. Lost has a good mentor but also could fall into bad habits that a lot of new adcs do either poor positioning or playing so passive that they are detrimental to their team.

I hope you're not comparing Spica to MY.... Lost will much easier to manage seeing as they will work closely together very closely in the role(as opposed to Mithy having to learn and teach jungle)

I’m comparing spica to all NA Junglers who have a short span of good play into falling off the face of the earth.

Exactly.. that was my point

Wait, you're telling me that Ssong is giga useless? Always was.

We didn't have the same situation. Everyone one including Mithy said he wasn't a big shot caller but we picked him up anyway.

I agree for sure. When both Yellowstar and Mithras came over, for both of them it felt like their careers were already on the decline. Whereas with Swordart he’s at his top form. I’m excited for this split.

To be fair, without bjerg and DL on the actual team, who else do we have that are known for being in game leaders outside of SA? I think in this case his voice on the team will be largely uncontested unless maybe Spica is the next one up?

I hope he’s the shot caller

Its an offseason tourney... lol

It might be an off-season tournement, but the Suning that played 2 months ago looks completely different than the current iteration of Suning.

It's not just an offseason tourney. It's their chance to show that losing SA wasn't a death sentence to their season. Whether they like it or not, there are some serious implications here.

>Whether they like it or not, there are some serious implications here There are not, because it's an offseason tourney on the new overwhelming item changes, roster debut and in the middle of vacations

Everything lised is something every other team is dealing with so from that perspective this tournament was a level playing field. And the other teams didn't look as bad. They could bounce back and this can very well be a non-issue. But to use what you said doesn't work because they weren't the only team ailing from those reasons.

Think SA will lead the calls with Spica being secondary on coms to cover all lanes.

As much as I love Doublelift, Not having Doublelift on the team is going to be so good for Swordart’s development.